SuperJob is one of the largest Russian job and employee search portals, which is used by millions of people every month. In 2010, the service set itself an ambitious task: to improve its usability, and to do it as correctly as possible: first, to carry out usability testing of the current version of the interface in order to figure out the numerical indicators of the interface quality, then to design and implement a new version of the interface, and then to carry out the usability testing again to measure quantitative changes in quality indicators.

To design the employer's interface taking into account the results of usability testing.

In the new employer interface, the main focus was made on improving two parameters: reducing the likelihood of making a mistake and reducing the time it takes to perform typical employer operations.

Work started with peer review. We studied the current employer interface and analyzed similar offers from competitors. As a result, we not only came up with ideas about the necessary interface improvements, but also proposed new ideas for expanding functionality useful for the employer.

Further, it was necessary to objectively assess the importance of the proposed changes. Based on the results of the peer review, popular support questions and the hypotheses of SuperJob specialists, a script was drawn up and usability testing was carried out. Testing confirmed most of the hypotheses, disproved some, and also revealed new, unexpected problems. For example, some of the respondents do not delete uninteresting CVs in their daily work, as a result of which they work with a list of several hundred CVs.

Based on the test results, the employer interface was redesigned.

The main “employer's workplace” is a list of received CVs. A new view of the received CVs list. Data is better grouped and thus it is read faster; group actions on CVs are separated from filters; the position in unread CVs is highlighted in bold; CV action buttons appear when you hover the mouse cursor, and before that they don't distract you.

A new scenario for working with the received CVs was revealed during testing. Due to the crisis, job seekers have begun to respond more often to related, non-core vacancies for them, therefore, before thoughtfully considering a CV, the employer quickly goes through the entire list of new CVs and removes up to 80% of them. In order to speed up the process of primary processing of the CV, a short form of displaying information in the list was proposed and the ability to reject the CV without confirmation, in one click. To speed up the process of working with a large number of CVs, non-basic information, which may nevertheless be needed, is displayed on the same page. User comments on the CV are displayed immediately, and the cover letter can be viewed without switching to a new page. The CV view form has also undergone a detailed revision. CV action buttons are clearly separated from the text, basic information - job title, salary, age and contact information - are highlighted in a separate block to speed up reading. 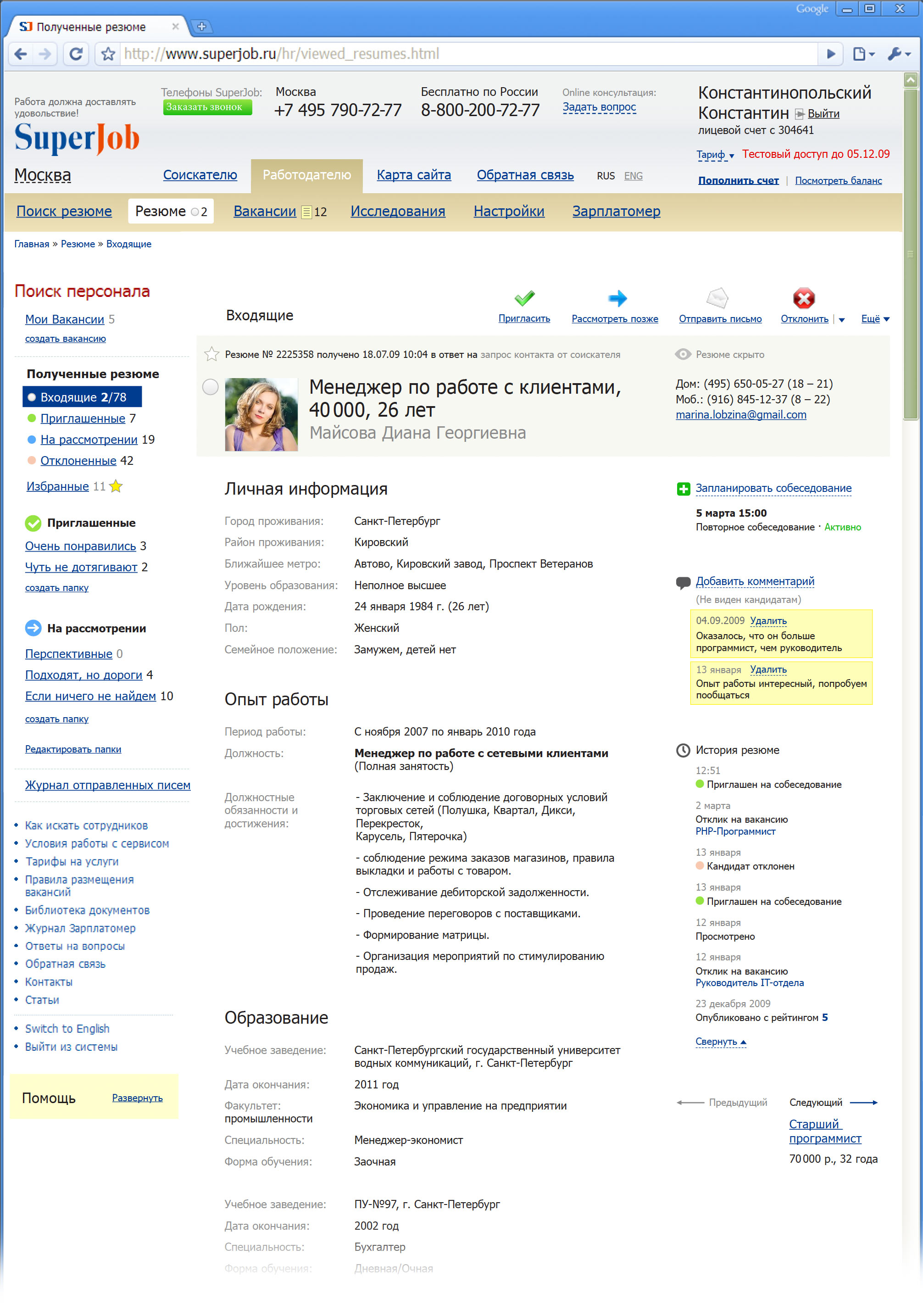 In addition to structuring existing information, without sacrificing readability, the page has been added to display candidate events and CV history.

The final prototype of the new employer's interface contained more than 150 pages, the list of received CVs is a small part of them that we can introduce you to.

Other projects on wireframes and prototypes

Development and design of the interface of the Target.mail.ru affiliate network

Development and design of the "Happy Bottle” online store interface

Development and design of a mobile application for Yota subscribers